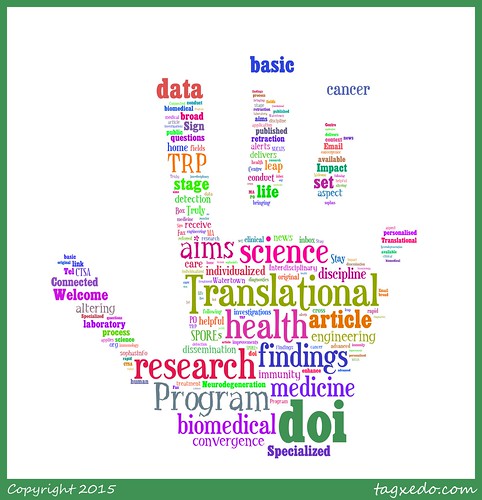 At MLA last May, I was walking around the vendor hall, like most of us who attended, I assume. I was on a mission, though. I stopped by every vendor table that had anything to do with publishing or translational science, and talked with them at length about the idea of having plain language abstracts. I’ve been a fan of plain language initiatives for a long time, as evidenced by our library’s Plain Language Medical Dictionary app from some years ago. I wish I could say that I was doing this as a direct result of the PNAS article on the topic published in March, but no such luck. That would have helped make my arguments more compelling, I’m sure. I found the article today, thanks to the National Science Communication Institute retweeting Len Fisher.

A circuitous route, but effective enough to reach me. The article in question was this.

The article was short and sweet. It talked briefly (very briefly) about alternative modes of science communication, such as social media and blogs, and how they impact on audience, understanding, and adoption of new ideas. The authors then pointed out that these are limited to the few who choose to follow that channel, and it misses the benefits and affordances of mass media channels, a concept which they illustrated with a diagram of how they perceived the connections between the information channels and the audiences. Here’s the gist of it.

So far so good? There are obviously many more potential audiences as you subdivide these. In my conversations I was rather fond of mentioning insurance companies and agents as critical links in the chain of adopting healthcare innovations who are perhaps more likely to benefit from a plain language abstract. I also talked about the importance of highly motivated patients who take new articles to their clinicians as a recent and influential loop in the information chain that changes practice. For benefits to come through these channels requires not simply that there be a version of the abstract that is in plain language (a lay summary) but also, and equally important, that those lay summaries not be behind a paywall. One of the publishers was absolutely sure their abstracts were not being a paywall, and then when they went to show me, well (ahem), they found they were. As in, the abstracts were locked behind a paywall. Oops.

The most important part of the article’s diagram was the very subtle sideways dashes. Where do the journalists get the hook, the info that leads them to ask more questions and write those mass media articles that reach such large audiences? What triggers the journalist to reach out for those important conversations with the scientists? Well, the press releases, of course. That’s why our organizations work so hard on them. Seeing something posted and reposted on social media is another good way to reach them. But the traditional abstract? Not so much. The traditional abstract is crafted explicitly for other scientists in your field, and only partly for scientists beyond that. Now, a lay summary, a plain language abstract, that has HUGE potential as a way to reach journalists. It’s another marketing tool, beyond being the right thing to do to help patients, or to help get science into the hands of those who actually use it, or to help influence clinical practice and foster more rapid adoption of new discoveries and treatments.

Currently Emerging Technologies Informationist at the University of Michigan Taubman Health Sciences Libraries, Fall of 2014 was the 40th anniversary of Patricia's first library position, at age 17, as a Circulation assistant. Over the years, her professional interests have encompassed consumer health literacy and outreach, plain language resources and tools, all things dentistry, systematic reviews, artificial intelligence, informatics, accessibility, multimedia, history, education, and search engines, with technology and innovation connecting themes through them all. View all posts by Patricia Anderson

2 thoughts on “Plain Language Summaries for Translation in Science”